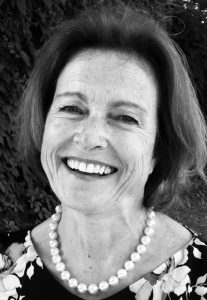 She created the character of ZoZo to show children that speaking a foreign language can be both easy and fun. Her book for children ‘It’s Fun to Speak French with ZoZo’ was the Daily Mail’s Junior Book of the Week in 1994. Her game ‘FrenchStart’ was a best seller followed by ‘FrenchTots’, which were distributed by the Early Learning Centre. ‘ZoZo’s French Party’ also became a favourite with both children and teachers alike. You will probably recognise her voice on Dorling Kindersley recordings as well as countless other audio cassettes produced by leading publishers.

Teresa’s expertise in early language learning won her a place in ‘The Best of British Women Directory’ (Reed 1993) and she has been interviewed on ‘Woman’s Hour’ and ‘Anderson Country’.

“The hallmark of Le Club Tricolore has always been ‘quality not quantity’,” she says. Her Club has thus grown through personal recommendation.

Teresa believes that all children have an aptitude for languages. She is the inspiration and driving force behind Le Club Tricolore. She hand-picks her teachers, trains them in The Scibor Method, which she devised over 20 years ago. All the teachers are dynamic, native French speakers who have a special rapport with children. Teresa ensures that high standards are always maintained throughout the Club.

“Seeing is believing! These children are learning Key Stage 3 French and they are only five.” Mrs Christine Dipple, Ofsted Inspector for languages.